Women, Girls, Ladies offers a FRESH conversation among intergenerational feminists about all that matters: power, work, sex, motherhood, pop culture, the future, and everything in between.

We're all going to go to bed with massive, contented smiles on our faces after reading this young woman's reaction to our most recent panel, in which she says that she experienced, "a great awakening of the calm, negotiable, and strong feminist I can be." Amen.

And check out this great video she shot of one of the Starr Symposium organizers pre-show:

We had an incredible day in Kansas City, Missouri with the wonderful women of the UMKC Women's Center and the Starr Symposium. It started with a workshop designed to foster intergenerational dialogue among women about work/life issues. We had all sorts of interesting insights, including the fact that power remains a problematic word for a lot of women. (More reason to read Gloria's new book!)

Our evening panel was filled with rich images, good humor, and deep insights (if we do say so ourselves). Actually, we don't have to say it, because so many other people have been. Here's a selection of the blog posts that have been written by diverse women in reaction to our conversation in Kansas City:

I was intellectually blissed out for two hours...After the talk, I went over to say hello to Gloria, who spoke at BlogHer '10, and mentioned I sure wish I'd had Gloria Feldt to talk to when I was 15.

And therein lies the rub. We have to grow into our power. And we can't do that if we're so exhausted from balancing jobs and family that we have no time left for what's in our heads.

It was more than perfect. My time in the auditorium reminded me that I had been raised by a woman – my mother – who is a raging feminist, and that I had been deeply molded by two women – my grandmothers – who would have never admitted to being feminists in any form. These women gave me their best and let me catch glimpses of their worst. What shakes me to my core is that I never think about being a feminist myself, because I really don’t have to very much. It is ingrained in me to believe that women can do anything and be anything.

Thank you all for not being afraid to advocate for a world where men and women can enjoy 'genuine equality, educated choice, and live intentionally with authenticity.' Thank you for not being afraid to claim the “f-word” and for setting an example for:
-how to redefine power structures in an effort to correct imbalances
-how to understand our worth as women-individuals and negotiate accordingly
-how to assert our wants and needs without making unhealthy compromises
-how to approach partnership-relationships and work-life balance
-how to imagine better for our sons and daughters
-how to be courageous and when faltering or failing, do so GREATLY
and forgive ourselves
and try again tomorrow–
wiser, but also with as much passion, fervor, and optimism as before.

-Chiazotam Ekekezie, to live (def)
Posted by Courtney at 10:23 AM 3 comments:

It's been so fun for me to read the galley (the pre-publication form of a book) of Gloria's new manifesto: No Excuses: 9 Ways Women Can Change How We Think About Power. It's brought up all sorts of questions for me:

When does it become noble to exercise one's personal power in service to the collective and when is it self-sacrificing?

Why doesn't it feel like the rise of technological tools like the Internet have supported us to see the ways in which we have collective power? Instead it seems to encourage further individualization.

Is it really courage, as Gloria asserts, that women are lacking, or is it focus?

It's interesting that we have both been thinking, researching, and writing so much about power, social change, and gender, but coming at it from very different angles. My new book, Do It Anyway: The New Generation of Activists, was published by Beacon Press on September 7th. Here's a video of me talking about why I wrote it:

It's all great fodder for our upcoming panel at the University of Missouri-Kansas City, where we are returning for a second time to focus on work/life issues. We're very excited. (Thanks Brenda!)

And look out for the October issue of Harper's, in which Susan Faludi writes an article about intergenerational feminism that prominently features WomenGirlsLadies! We can't wait to see what Faludi had to say.
Posted by Courtney at 1:33 PM 9 comments:

Recently I was at the SeeJaneDo conference where I heard this story. I was so moved by it that I immediately had to include it in my forthcoming book about women's relationship with power--No Excuses, to be published in October--despite having already having turned in what were supposed to be the last changes.

It’s said that when a baby elephant is being trained, she is tied to a post almost immediately after birth. During the first few weeks of life, she attempts to break free of her restraints, but she’s not strong enough. So she comes to believe she can’t get away from what is holding her back even after she has grown large and plenty powerful to uproot the post entirely. As a consequence, even as an adult, she remains tied to the post due to an internally motivated behavior that is no longer rooted in external reality.

Wow, that just perfectly describes so many of the women in my generation, including myself. If women want to embrace our power we must reject baby elephant thinking and throw off the shackles of learned behavior that no longer serves us. And when older women talk with younger ones, they might have no reference point for the barriers we older ones are all too familiar with. No wonder there can be strains on communication across generations!

One of the most heartening differences I have found among the generations is that the younger women are, the less likely they are to hold such false restraints in their minds. But the older women are, the more likely they are to have a sense of engagement with the women's movement that has fought for the very advances that created the amazing possibilities women today have to do or be whatever they choose. Without a movement, it is easy to start going backward. History is replete with advances that turned into retreats because people didn't know how they got there.

All of this is why I feel the conversation engendered by WomenGirlsLadies is so important, and I invite you to participate in it here on our blog or in person if we are so fortunate as to be invited to your university or organization.

The Paradox of Reproductive Choice

There's nothing that gets the intergenerational dialogue churning like that ever-elusive quest for a balance of love, work, and babes. My column this week highlights some of the specific forces that are influencing my generation. An excerpt:

This year -- the year I turned 30 -- the birth-control pill is turning 50. As Elaine Tyler May points out in her new book, America and the Pill, that little technology promised a whole lot of change -- feminist liberation, angst-free sex, world peace -- that it hasn't quite delivered. Another thing that the pill didn't do was eradicate the modern woman's wrestle with those tricky twins: time and fertility.

I've recently left my 20s behind and people have started asking me if I'm going to procreate. I don't blame them. I'm acutely aware of the fact that time is already not on my side. Most studies indicate that fertility takes a downturn for most women in their 30s; most studies also indicate that men's sperm become less hearty as well.

This race against time is nothing new for people who want to have children but also want to enjoy their work, leisure, and autonomy. We still don't have federal legislation or a workplace culture that supports working families. We still haven't figured out the child-care hustle in our private lives.

What is new is the specific cultural moment in which we struggle.
Posted by Courtney at 12:52 PM 2 comments: 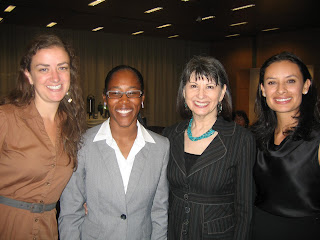 We had a fantastic event this month at ASU. Here's a picture of the crew of us--this time we were grateful to be joined by Maria Teresa Kumar, of Voto Latino, and Brittany Collins, an amazing ASU student.
Posted by Courtney at 11:14 AM 311 comments:

Women and Power: Connecting Across Generations

Check out Marianne Schnall and Patty Goodwin's piece on intergenerational feminism in anticipation of the Omega Institute's upcoming conference. I'll be speaking, along with Helen Thomas, Gloria Steinem, and many, many more. After introducing the three of us, they write:

So what do these three women have to talk about? Are they on the same page or at each other's throats? The cross-generational cartoon stereotype depicts a 60-something, white, man-hating, frizzy-haired feminist sneering at a spoiled, bulimic, twenty-something slacker. And some pundits would have you believe there's a vast generational divide, with not only divergent life experiences, but rivers of misunderstanding and resentment flowing through it.

But Courtney Martin doesn't entirely agree, and points to the media spreading common misconceptions about younger women including "the notion that my generation, the younger generation, is entitled, and ungrateful, or out of touch with what feminism means. That is something I hear bandied about a lot, particularly in mainstream media spheres."